How to defend a Corner-Kick 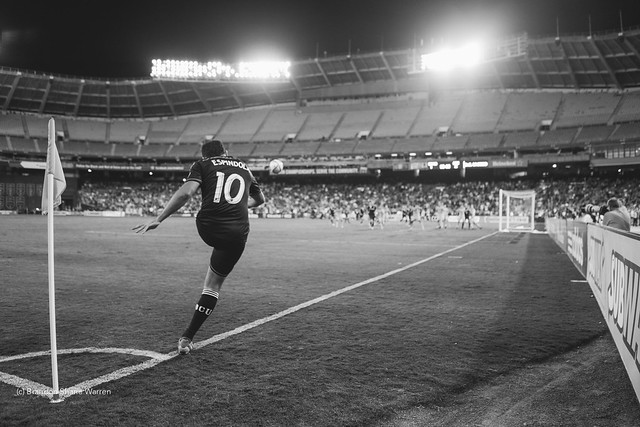 How much emphasis in put on defending of a corner-kick?  I mean sure all of us have been taught about having a player on each post; why is that though?  Are you really sure where you should be standing or who you should be guarding?  This blog is going to outline 2 approaches that can be used to defend a corner kick no matter who you are guarding or playing.

A big mistake coaches and player make is they simply have everyone pick up a man.  This is dangerous.  You cannot simply have players mark a man and hope everyone holds to their task.  There are so many bodies in the box that players are bound to lose their marker and someone will be free for a chance on goal.  There need to be a select few players who play positionally.  That having been said, you need to have a player on each post, a player in front of the goalie and a player on the 18 yard line closest to the corner-kick.  The reason for players on the posts is two-fold: (1) things happen so quickly in the box that the goalie will more often than not have a quick enough reaction to get from where he is standing to a post or to where the ball is being hit.  For this reason, players or put on the posts to help the goalie out. (2) If the goalie is out of the net jumping for the ball and is completely out of position, all is not lost as there are two players still on the line there to protect the net.

The other 2 positions that you need to have a player play positionally is on 18 yard line closest to the corner and infront of the goalie.  The reason for the player on the 18 yard line is to provide a safety net for any short passes that are made.  That player can quickly jump out and force the player away from the net rather than having them dribble into the box freely.  Secondly, this forces the player taking the corner to get the ball over this persons head and into the box.  The advantages of this is that the player taking the corner cannot easily whip a ball into the most dangerous area of the field (the 6 yard box), he/she will have to loop it over or around, giving the goalie a chance to make a play on the ball.

The reason you want a player in front of the goalie is because teams like to put an offensive player in that area to give the goalie a hard time to maneuver.  The defensive players assignment in this position is to force this player away from the goalie without incurring a foul.  This is not an easy task and will often result in rough play.  The important thing is to protect your goalie at all costs.

The remaining players are to man mark.  As I mentioned, this is a dangerous and difficult approach.  If just one players loses his marker, that can result in a goal.  Every player must be very focused on guarding their marker and not allowing them opportunities at net.

A zone formation is a safer approach than the man marking approach, but can be vulnerable to disaster if not played correctly.  In the zone formation, the players I mentioned played positionally above will once again assume their positions on the posts, help to the goalie and on the 18 yard line.  You will now need an additional 6-7 players.

Have your two strongest aerial players stand at the front and back end of the 6 yard line.  Anything in their vicinity (and balls usually fall in this area) are theirs to clear.  Have a player at the back end of the box, and 2 players at the top of the box.  In this formation, the goalie plays a very critical role because anything that falls in the area of the penalty spot should be the goalies.  Make sure not to commit all your players into the box.  Have 2-3 players outside of the box and as far out as possible.  What this does is provide an outlet for players clearing the ball and it also keeps the opposing teams players occupied with defending these players rather than being in the box to score.

Many goalies are afraid to come out to punch the ball or grab the ball because they might not get to the ball and it will result in a goal.  Goalies must be reminded that 2 players are on the posts and are there to allow the goalie to go make a play.  A goalie must be very certain he/she will get the ball and must go up determined.  Referee’s will usually give the goalie the call if there is contact.  Goalies, think of it this way: the 18 yard box is your zone – you have the majority of the rights and majority of the capabilities other players don’t have.

This formations requires that one person be in charge or setting everyone up.  If this is the goalie that is good, but if not, one player needs to make sure everyone is in their positions.  If there is no communication, there will be holes everywhere.  When in your assigned position, understand that you are not to chase the ball all over the box – stay within 2-3 meters of your original zone and trust that the other players will defend their zone well.